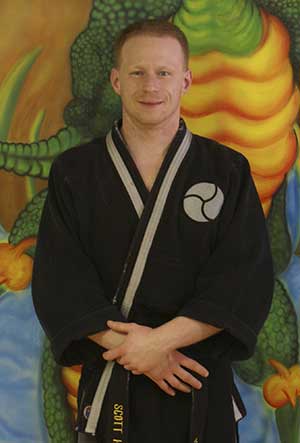 Mr. Scott Hill is a Fifth Degree Black Belt and Certified Instructor under Mr. Jason Patten. He began his Martial Arts training upon graduating high school. After wrestling for 6 years Mr. Hill needed a new challenge, so he began his training in kendo. He then found Patten’s Martial Arts.

In 1996, after earning his green belt, Mr. Hill began competing in full contact karate tournaments. Then drawing from his extensive grappling background, he pursued competing in Jiu Jitsu tournaments.

Once he achieved his First Degree Black Belt, Mr. Hill decided to expand his training to include many specialty art forms ranging from stick fighting, knife fighting, rapid assault tactics, submission fighting and close courters combat. “Become proficient in everything, stink at nothing” has always been a personal mind set of Mr. Hill’s training.

His passion for learning and training and his desire to make the world a better place put him on the path to teaching. His high energy training environment has encouraged many people to grow in mind, body and spirit. His fundamental philosophy of “family first” is reinforced in every stage of training.

Mr. Seward received his Black Belt in 2005 and moved away from the school. Shortly after Mr. Seward took some time off, but when Mr. Hill opened his own school, he asked Mr. Seward if he was ready to start training again. Mr. Seward jumped at the opportunity and was as excited as he was at his very first class. Mr. Seward achieved the rank of 4th degree Black Belt in 2014 and is a gray stripe certified instructor. Mr. Seward is also the chief weapons instructor for the Sai, Tonfa, Escrima, Bo, Nunchukas, and Sword classes. In addition to martial arts, Mr. Seward owns and operates Extravagant Painting, Inc. which does private residential and commercial painting. In his spare time he also enjoys playing the guitar, exercising, and most importantly, spending time with family.

Ms. Angelia Fry joined Martial Arts to train with her children and nieces in the summer of 2009. She obtained her First Degree Black Belt in October 2010 and her Fourth Degree Decided in January 2017. Her love for the Martial Arts and her determ ination to share everything she has gained from it, lead her to a path of Certified Instructor, which she obtained in August 2012.

Ms. Fry also teaches our Women ’ s Self-Defense classes, is a member of our Demo Team, helps coach for tournaments, coordinates our After School Enric hment Programs, and helps coordinate our extra-curricular activities for Black Belts. Her beli eve in the positive development of the community youth has compelled her to hold several volunteer positions with the Boy Scout s of America, Girl Scouts of Southwestern Ohio, and Little Miami Athletic Association.